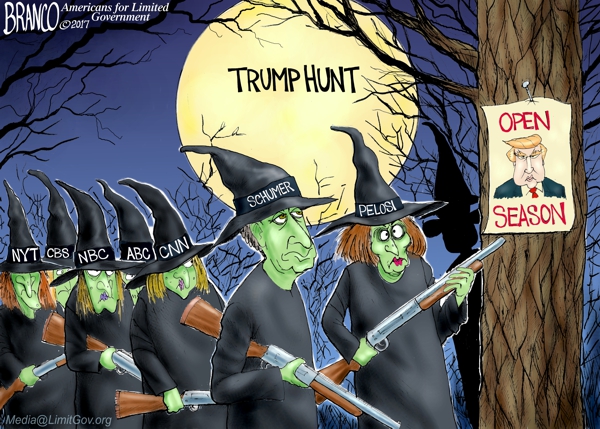 From HILL by BY BRETT SAMUELS AND MORGAN CHALFANT

President Trump lashed out House Democrats’ impeachment inquiry in a smattering of tweets Tuesday as his White House staff blasted Democrats for what they termed a “baseless and partisan attempt to undermine a sitting President.”

The president, in a series of tweets, ripped the impeachment process as a “witch hunt” and took aim at two of the Democratic lawmakers who have led the proceedings that brought two articles of impeachment against Trump Tuesday.

Trump targeted House Judiciary Committee Chairman Jerrold Nadler (D-N.Y.), pushing back on his comments at a Tuesday morning press conference that the president pressured Ukraine to interfere in the 2020 U.S. election.

“Ridiculous, and he knows that is not true,” Trump tweeted, pointing to past comments from Ukrainian President Volodymyr Zelensky saying he did not feel pressured by Trump in a July 25 phone call.

Trump also revived his complaints about House Intelligence Committee Chairman Adam Schiff (D-Calif.) exaggerating the president’s comments from the July 25 call in a hearing in September.

“Shifty Schiff, a totally corrupt politician, made up a horrible and fraudulent statement, read it to Congress, and said those words came from me,” Trump tweeted. “He got caught, was very embarrassed, yet nothing happened to him for committing this fraud. He’ll eventually have to answer for this!”

The flurry of tweets came shortly after Nadler, Schiff, Speaker Nancy Pelosi(D-Calif.) and other top Democrats unveiled articles of impeachment against Trump, accusing him of committing high crimes and misdemeanors.

Democrats accused Trump of abusing his office and obstructing Congress after conducting an investigation into his actions. The Judiciary Committee is expected to vote on the articles this week before they move to the full House for a vote.

If the articles pass the House with a majority vote, Trump will become just the third president to be impeached.

At the center of the inquiry is a July 25 phone call during which Trump asked Zelensky to investigate former Vice President Joe Biden and his son Hunter’s business dealings in Ukraine.

Democrats have argued they have clear evidence Trump tried to use a White House meeting and security assistance to pressure Ukraine to launch the Biden investigation as well as one into a debunked theory about Ukraine’s involvement in the 2016 Democratic National Committee hack.

Trump has maintained he did nothing wrong on the call, encouraging people to read the rough transcript of it that has been released by the White House.

White House press secretary Stephanie Grisham accused House Democrats proceeding with the inquiry with a “pre-determined outcome,” claiming they sought to impeach Trump because they don’t believe they can beat him in the 2020 presidential election.

“The Democrats’ use of a phone call with the president of Ukraine — with a transcript the President himself released — served as their excuse for this partisan, gratuitous, and pathetic attempt to overthrow the Trump Administration and the results of the 2016 election,” Grisham said.

Grisham called the impeachment articles “baseless” and claimed they hurt the American people “who expect their elected officials to work on their behalf to strengthen our Nation.” She said Pelosi and other Democrats had forced “unfounded accusations down the throats of the American people.”

“The President will address these false charges in the Senate and expects to be fully exonerated, because he did nothing wrong,” Grisham said.