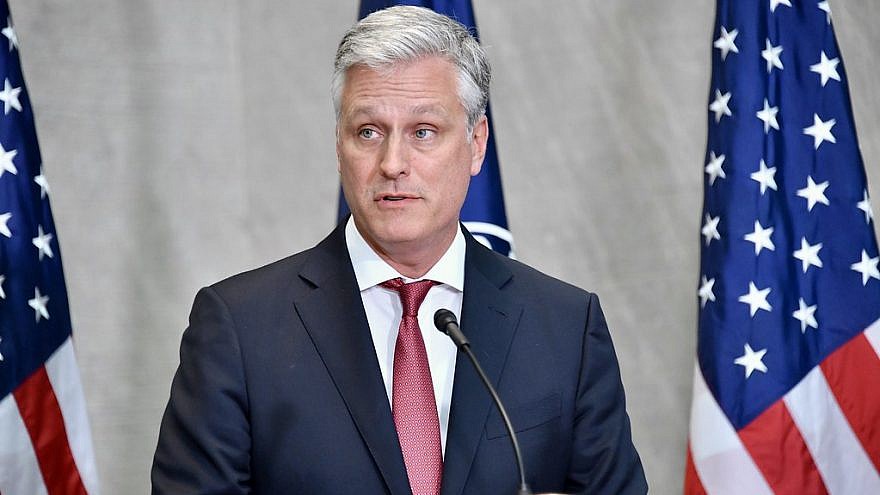 Ambassador Robert O’Brien:
Thank you, John.  Happy New Year to everybody who’s on the line.  It’s obviously an important couple of days for the United States and for the world.

As you know from having seen President Trump and having heard from Secretary Pompeo and the Department of Defense, the President directed the United States military to carry out a decisive operation against the terrorist leader, Soleimani, in order to protect American personnel.

This was designed to prevent further bloodshed.  This was a defensive action.

Soleimani was in the Middle East, in Iraq, and traveling around the Middle East.  He had just come from Damascus, where he was planning attacks on American soldiers, airmen, Marines, sailors, and against our diplomats.  So this strike was aimed at disrupting ongoing attacks that were being planned by Soleimani, and deterring future Iranian attacks, through their proxies or through the IRGC Quds Force directly, against Americans.

As President Trump said today, this action was taken to stop a war, not to start a war.  President Trump has been very clear he’s offered to talk without preconditions, at any time, with Iran.  And he continues to seek a peaceful resolution with Iran.  Unfortunately, those efforts by the President have been rebuffed.

Soleimani has a long history of attacking Americans.  And there are at least 600 Americans that were killed with these shaped explosives — IEDs — that were used in Iraq on a regular basis, and there were many, many more Americans that were maimed, losing arms, legs, their limbs, because of his activities.

He’s also been involved in activities such as supporting the Assad regime and their brutal efforts in Syria, which has resulted in the loss of hundreds of thousands of lives in Syria, and was involved in, most recently, in putting down the protests in Iran at the cost of countless — probably over a thousand lives of Iranian citizens.

The most notable example of his activities in the past couple of weeks was the attack on the K-1 Air Base, on December 27th, which resulted in the lives — the loss of life of one American contractor and the injury to four of our service men and women.

So this was something that the President felt was necessary to do.  The President exercised America’s clear and inherent right of self-defense to counter this threat.  It was a fully authorized action under the 2002 AUMF and was consistent with his constitutional authority as Commander-in-Chief to defend our nation and our forces against attacks like those that Soleimani has directed in the past and was plotting now.

So, with that introduction, I’m happy to take some questions from you.  I am traveling with the President now, so unfortunately my time is a bit limited.  And so let’s go straight into questions.  Thank you.

Q    This is Kim Dozier from TIME.  You say that this means we’re not closer today to war, but we’re hearing threats of retaliation from the Iranian regime and also predictions from various diplomats I’ve spoken to that negotiations — there’s no way they can start now.

Ambassador O’Brien: Thank you, Kim.  Look, Iran has two choices here; they just got two roads to go down.  One is further escalation.  And pursuing that path will lead to nowhere for the Iranian people or for the regime.  And the United States will not be intimidated by threats from our adversaries.  And we’ve made it very clear that should Iran retaliate or escalate — and again, this was us disrupting a plot that their leadership was well aware of, that Soleimani was involved with.  They know what they were up to.  We had the right to self-defense; they understand that.  If they choose to escalate, that would be a very poor decision, in my view, for the Iranian regime.

The alternate path is to sit down with the United States, for Iran to give up its nuclear program, for Iran to stop its regional escapades and proxy wars in the Middle East, to stop taking hostages, and to behave like a normal nation that’s part of the community of nations.  In that case, as the President said today, Iran has a fabulous future — you know, a terrific future for the Iranian people.  They’re hardworking people.  They’re smart people.  They’re innovative people.   And there’s no reason that Iran shouldn’t be a great country.  But it will not be if it continues down the path of war and terrorism and its nuclear program.

Q    Thanks.  Brian Karem, Playboy Magazine.  Going forward, do you anticipate that you’ll be briefing the Gang of Eight or any other members of Congress about future moves the President makes regarding Iran?

We expect to be giving classified briefings to members of Congress in the coming week, when they return from recess.  They’re scattered around the United States now, as all of you know, on their holiday recess, but we expect them to be back next week.

And we will be further engaged with Congress, the Gang of Eight, as well as relevant committee chairmen and key members of the House of Senate.  We’ll continue those briefings, and we expect to a have very good dialogue with Congress, going forward.  And all appropriate notifications for — that are required by law that we need to make, the administration will make on a going-forward basis.

And the President made the decision that it would be — while there’s always a risk in taking decisive action, there’s a greater risk in not taking that action.  And the President just was not prepared to risk the lives of American service men and women and our diplomats, given Soleimani’s history and his efforts to further destabilize the region and the imminent nature of the attacks that he was planning on Americans in Iraq and in other locations.

So once the President had that information and the national security principals were aware of that information, that was a very straightforward decision for the President to make the call on this.  And that took place — I’m not going to get into specifics, but it did take place ahead of the attack, but the President was kept apprised on an ongoing basis of how the operation was proceeding and was informed of the operation on a very regular basis and very shortly after it was concluded.

So I was with him at the time that the operation was concluded, and (inaudible) notification from the commanders.  So it was something that we’ve seen for — it had been going on for several days, and the President made the decision that we had to move and take action to protect Americans.

Q    Hi, this is Laurie Mylroie, Kurdistan 24.  Were there elements from Iraq — Iraqi militias or Iraqi political figures — involved in this plot (inaudible) Qasem Soleimani?

Ambassador O’Brien: Thanks, Laurie.  I don’t want to get into specific details, but Soleimani is well known for using proxies in Lebanon, in Syria, in Yemen, and in Iraq.  And there were certainly Iranian proxy forces that had engaged with the K-1 base, as well as the embassy, but I don’t want to get into specific details of who he was meeting with and what the plans were.  But rest assured that Soleimani was continuing his long-time practice of working with Iranian proxies in Iraq and in the region to further his goals.

Q    Hi, this is Jeff Schogol with Task & Purpose.  I understand that intelligence is a sensitive matter, but given the enormity of the situation, can you say what were the targets of Soleimani’s planned attacks and what evidence do you have that he was planning them?  Thank you.

Ambassador O’Brien: Thanks.  It’s a good question.  And, as you know, it’s extraordinarily sensitive.  The enormity of the situation is the fact that this guy — you know, terrorist — had operated for many, many years, over 20 years, as the head of the IRGC Quds Force with, basically, on a carte-blanche basis in the Middle East, conducting attacks against his own people in Iran, against the people of the region, and against Americans.  And so, you know, to the extent there’s — this enormity is record in bringing mayhem to the region.

As far as intelligence on what his plans were and what the targets were, I’m not going to get into this at this point.  But at some point, that may be something we can discuss, but it’s not something I can discuss at this time.

Q    Hi, this is Bryant Harris with Al-Monitor.  The Iraqi parliament is having an emergency session on Sunday.  It looks like they may be voting on kicking out U.S. troops, you know, in large part to retaliate for the strike on Soleimani.  So, before you made the strike, did you consider the possibility that Iraq may kick out U.S. troops?  And if Iraq does kick out U.S. troops, what does this mean for the counter-ISIS campaign going forward?

Ambassador O’Brien: Thanks, Bryant.  We’re aware of the meeting that’s scheduled for tomorrow.  The United States has invested enormous amounts of blood and treasure in helping the Iraqi people, our friends in Iraq, build up a democracy after Saddam Hussein and the brutal regime that he operated for many, many years about this regime that was — in a tough region was particular in its cruelty to its own people.

So the American people have been extraordinarily generous with their lives and with their treasure to the people of Iraq, to help them move forward.  So, you know, we’d certainly be very disappointed if there was some sort of adverse decision by the Iraqi parliament, the Council of Representatives, with respect to our continued ability to assist the people of Iraq.

I think one of the things that was interesting is, last night, you saw people going to Tahrir Square to celebrate that Soleimani and his yoke were no longer on the people of Iraq.  You’ve seen the people of Iraq attack — including Shias in Iraq — attack the Iranian embassy — the Iranian consulate in Basra.  You’ve seen protests in Iraq against Iran’s infringement on Iraq sovereignty.

So we really look at the operation that took place.  It was an operation that was in support of the people of Iraq, that was in support of a sovereignty of Iraq against oppressors from Iran and specifically against Soleimani and the IRGC Quds Force.
So we’re certainly — we’ve invested a lot in the future of Iraq and the friendship that we have with the Iraqi people, so we’re looking forward and hopeful that we’ll have a good relationship with Iraq going forward.  Certainly, there’s some high tensions after what’s happened.  But again, I look at those people going out into Tahrir Square to demonstrate in favor of the United States and to celebrate a bit of a new lease on freedom as a very positive sign with Iraq.

As far as do we consider what could happen as a result of this operation, we certainly considered all aspects.  We have a fantastic national security team, starting with the President, the Vice President, with Secretary Pompeo, Secretary Esper, Chairman Milley, Gina Haspel, Joe Maguire.  We have a really extraordinary team.  That team put in some very heavy work to get prepared and to brief the President and to make this decision.  And so we looked at all types of contingencies of what could happen in the post-operation, including our relations with the government of Iraq and the people of Iraq.

And again, my hope is that the — you know, and I think we’ve seen it — that the people of Iraq will be grateful for the fact that we’re defending Iraqi sovereignty, whereas Iran is interfering and meddling with the government of Iraq.  And that’s been — that was one of the reasons for the protests that took place over the past several months.

MR. ELLIOTT: Once again, this was all on the record today, and so that embargo is now lifted.  Thanks for joining the call and have a great weekend, everyone.