Finally, President Donald Trump chose to lob a verbal grenade in the general direction of his old VP Mike Pence last Sunday night — regarding Pence’s ability to formally contest the results of the stolen 2020 election. This was, for many Trump supporters, long overdue. Here is Trump’s statement on the matter: 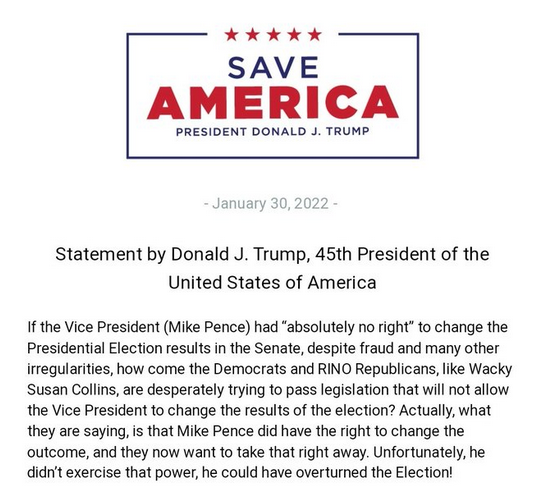 The reason that Mike Pence did not exercise the power to lawfully contest the election is that Mike Pence was never a Trump loyalist. He’s a GOP establishment loyalist. There were plenty of problems inside the Trump Administration, and Vice President Mike Pence was at the center of many of those problems. In fact, it’s always been obvious that Pence and his staff were deeply involved in trying to remove President Trump from office.

So, without further ado, let’s review all the evidence against Mike Pence. Trust me: there’s a lot of evidence.

Let’s begin with Mike Pence’s least favorite question: “Why did you insist that President Trump fire his National Security Advisor Michael Flynn in the opening days of the administration?” The official story is that Gen. Flynn had lied to Mike Pence about Flynn’s contacts with Russian diplomats. Nobody has bothered to ask Pence exactly how he was informed about Flynn’s private conversations. Think about it: somebody went to Pence with transcripts of Flynn’s calls and told Pence that Flynn was a national security risk. Who would have access to such phone calls? Who would want to lie about the nature of those phone calls to get Flynn fired?

It almost certainly must have been disgraced FBI agent Peter Strozk.

It’s likely that Strzok was the one who pushed for VP Pence to fire Flynn because we know that Peter Strozk’s assistant was Katherine Seaman — the wife of Mike Pence’s chief of staff Josh Pitcock. We also have the text exchanges between Strozk and Page discussing infiltrating the Trump White House in great detail. (This was the subject of an extraordinary letter from Senator Grassley and Senator Johnson to AG Bill Barr.) What did Pence know about the FBI’s attempts to spy on the Trump White House? Is it even possible that Mike Pence was totally unaware that his chief of staff’s spouse worked directly for the chief of the counter-espionage unit of the FBI?

We know that President Obama warned President Trump not to hire Flynn in 2016. We also know that Flynn himself believes that Obama advised Trump against hiring him because Flynn knew about the Obama administration’s role in spying on Trump’s presidential campaign. Removing Flynn as Trump’s National Security Advisor was a top priority for the Deep State.

In other words, Mike Pence was the first person to set the Russia Hoax into motion.

During the failed Ukraine impeachment of President Trump, plenty of State Department and NSC swamp creatures crawled out of the shadows to hurl lame accusations about Trump’s phone call with Ukraine President Zelensky.

Did you know that one of the main accusers was a national security official on Vice President Mike Pence’s staff?

A State Department official named Jennifer Williams was placed on Pence’s staff in April of 2019 — which was just in time to get involved in the Ukraine call and the subsequent impeachment. (What a coincidence that she arrived mere weeks before the call!) Just imagine being a few months into your new job in the White House only to volunteer to testify against the President in an impeachment trial over phone calls you didn’t like.

If you find that scenario absurd, you’re not alone. During her testimony before Congress, Jennifer Williams identified her working colleagues on Ukraine issues as Alex Vindman, Fiona Hill, and George Kent. She also testified that Trump’s call was “unusual and inappropriate” without explaining her legal reasoning. (That’s not so strange because Williams had defied an order from the White House by agreeing to appear for her deposition at all.) She was then sent off to CENTCOMM right after the Ukraine impeachment was over.

Again, obvious questions should be asked. Did Williams ask permission from Pence to testify against Trump? What did Pence know about Williams and her sudden interest in testifying at an impeachment trial against President Trump? Why did Pence not dissuade her from testifying in the first place?

This is the second time that Mike Pence and his office were involved in plots against President Trump manufactured by national security officials. Do you see a pattern forming yet?

3) Olivia Troye And The COVID Vaccines

The worst mistake that President Trump made during his administration was probably turning over the COVID Task Force to VP Mike Pence — because Pence turned it over to his chief of staff Marc Short and Marc Short turned it over to a little known national security official with no medical expertise. If you want to know the name of the person most responsible for unleashing the Dr. Fauci vaccine nightmare on America then remember the name of Mike Pence’s “COVID advisor”: Olivia Troye.

Why was the decision made to treat the COVID virus (developed and funded by the U.S. Government under the thin disguise of the EcoHealth Alliance) exclusively with experimental vaccines (developed with funding from DARPA) instead of therapeutics? Perhaps because Pence picked a national security official to advise him on COVID who regularly appears on TV now with a framed picture of Dr. Fauci hanging prominently behind her in her house. 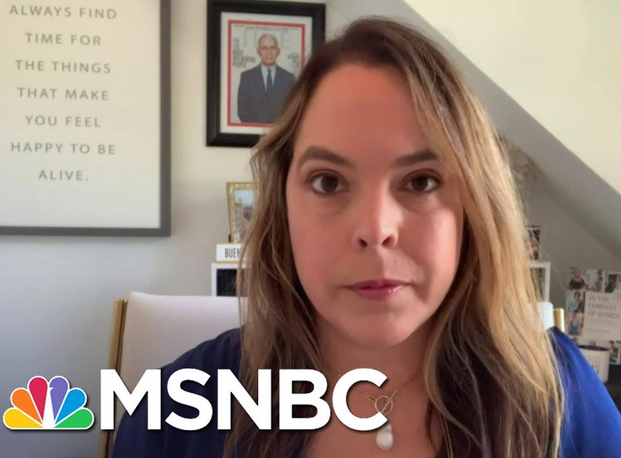 Olivia Troye was just as motivated to destroy the Trump Administration as Jennifer Williams, but she didn’t have the same level of interest in protecting VP Mike Pence from the fallout. (Pence’s people probably figured this out the day that Troye appeared in a TV ad announcing that she would vote for Biden.) Once again, Gen. Keith Kellogg was sent out to explain that Olivia Troye was another bad apple that happened to be planted in Pence’s office. (In fact, Kellogg announced that he had personally escorted Troye out of the White House when she was fired.) Troye then started a personal grift operation called the Republican Accountability Project — in which she came out of the closet as a full-time political operative for the Democrat Party
So that’s three members of VP Mike Pence’s office who engaged in anti-Trump activities during normal business hours. That’s a lot of treachery. Let’s not forget the ringleader of so much of this malice too: Pence’s chief of staff Marc Short.

If you still harbor doubts about Pence’s treachery, let’s turn to Pence’s chief of staff Marc Short for confirmation of these activities. On January 6th, Short found himself locked out of the White House with his car still in the parking lot. When a reporter asked Short why this had happened, Short’s reply was surprisingly honest: “He’s blaming me for advice to VP.”  The he in this case, of course, is Trump. 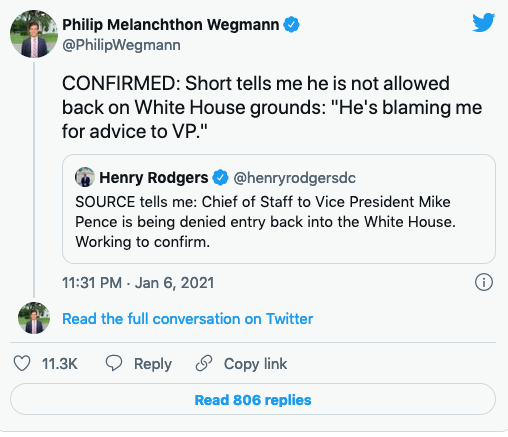 My own sources in the White House told me that Pence’s chief of staff Marc Short was literally the first person to call for Trump to accept the results of the stolen election and concede to Biden. Like I said at the beginning: there’s a lot of evidence of Pence’s treachery.

Long before GOP voters were suddenly surprised by Pence’s “lack of courage” on January 6th, I warned my followers on social media that any trust in Pence was misplaced. My sources in the White House told me that Pence simply disappeared after the 2020 election. (He went skiing in Vail rather than bother with contesting the 2020 election.) I wrote on Twitter at the time:

We might need to stick VP Mike Pence’s face on the back of milk cartons because he’s disappeared. Nov 08, 2020

Why did Pence and his staff spend four years hobbling the Trump Administration? Why can’t people believe that the GOP would try to impeach Trump to clear the way for Pence? Most Republican voters have never met the big GOP donors — and have no idea what they do with their money. The big donors wanted a Mike Pence/Nikki Haley ticket in 2024. They don’t really care what GOP voters want, and they never have. These are the people who pushed Jeb in 2016. And Paul Ryan before that. And Dan Quayle before that.

Pence is a creature of the GOP donors, not an America First patriot. That much is obvious now. Pence was added to the Trump ticket to restrain Trump’s populism — and that’s what he tried to do for four years. When pro-Trump aides were sidelined in the Trump White House, I heard the same thing from all of them: they were told to sit down and shut up and, if they were quiet, they might get to work for Pence and Haley in 2024.

It’s time for Republican voters to admit that they had no idea who Mike Pence was. Don’t be too upset with yourself. He fooled plenty of people. The man you thought he was — that guy doesn’t really exist. It’s time you paid much closer attention to your favorite politicians though— if you want your country to survive.

This article is courtesy of Emerald Robinson’s The Right Way. For the full experience, become a paid subscriber.

If the last 18 months have taught us anything it’s that YOU have to take control of your own health. You can’t rely on the government or big pharma. That’s where Z-STACK comes in. Z-STACK is a specially formulated supplement that includes Zinc, Quercetin, Vitamin C, and Vitamin D. Formulated by Dr. Vladimir Zelenko the world-renowned doctor that President Trump credited with his successful early treatment protocol and his decision to take hydroxychloroquine. Go to https://zstacklife.com/godzilla and order TODAY!