After President Trump stated his desire to withdraw troops from Afghanistan, Germany and South Korea, the bipartisan war party sprang into action.

When President Trump withdrew some U.S. forces from Syria, the D.C. elite erupted into full hair on fire hysteria.

It didn’t matter to Washington’s war machine Neo-Cons that Trump ran for Commander in Chief in 2016 on a clear platform of getting out of foreign wars, shelving the CIA’s meddling into sovereign nations’ affairs, scrapping deep state covert regime change schemes and demanding troop drawdown.

They never expected him to win anyway.

Along with all the other dubious and downright awful provisions, the House’s version of the bill has included a measure designed to thwart the president from bringing troops home. House Democrats worked with Liz Cheney (R-WY) on an amendment putting several conditions on the administration’s withdrawal from Afghanistan, requiring the White House to certify at several stages that further reductions wouldn’t jeopardize counterterrorism or national security.

Liz Cheney, having risen to the third most powerful legislator in the shrinking GOP House caucus, like her father, is completely unrepentant for the war-mongering mistakes her family has made for the last 40 years.

That’s the thing about the Cheney’s: facts and history don’t matter. They’ve been on the wrong side of every major foreign policy decision of the U.S. since Dwight D. Eisenhower.

They never own up to their disastrous mistakes — see WMD’s in Iraq.

Now, President Trump has stood up to the Cheneys, publicly challenging their Bolton-like interventionalist world view.

Hint: it has nothing to do with the smears accusing him of racism or Russian sympathies.

Trump is the only president to challenge the internationalist interventionist orthodoxy that’s ruled Washington unquestioned for the last 70 years.

Let’s go back to 1949, to the creation of NATO and the initial deployment of troops to Europe.

Joe Stalin and world communism was on the march, we were told. Russia controlled half of Europe and would take the rest—along with Korea—unless we acted. President Truman demanded American boys be ready to fight Russia in Germany, Japan, Greece, Turkey, Korea, wherever.

But even in that climate of crisis, support for permanent war was not unanimous.

Senator William “Wild Bill” Langer (R-North Dakota), one of the eleven Republicans in opposition (along with just two Democrats) called NATO “a barren military alliance directed to plunge us deeply into the economic, military and political affairs of the other nations of Europe.”

When President Trump declared before the immobile faces of Mt. Rushmore, “A nation must care for its own citizens first. We must take care of America first,” he was channeling that original America Firster, Joe Kennedy.

The man who would father three senators and a president offered this advice in 1950 (none of his children took it): America needs “to get out of Korea” and “apply the same principle to Europe.” We must “conserve American lives for American ends, not waste them in the freezing hills of Korea or the battle-scarred plains of Western Germany.”

Or in the mountains of Afghanistan or the deserts of the Middle East.

When you hear President Trump ask NATO countries to up their defense spending, compare that to the words of Joe Kennedy: “We cannot sacrifice ourselves to save those who do not wish to save themselves.”

Nancy Pelosi and her ilk call Trump a Russian asset for daring to put the interests of this country before empire.  Nothing new there.  Today’s Russia-baiters are cut from the same cloth as an earlier generation of liberals.

In 1951, The Nation magazine accused “Herbert Hoover and a good portion of the Republican Party” of being captured by Moscow—that portion opposed to NATO, because Hoover doubted the effectiveness of deploying ground troops against the communist nations.

The New Republic seconded the motion: refusing to commit American troops to NATO “may lead Stalin to attack Western Europe” and keep advancing until his minions “would bring out in triumph the first Communist edition of the Chicago Tribune.” Mitt Romney and his fellow impeachment travelers remain convinced we must fight the Russians over there so we don’t have to fight them over here!

Back then, the bipartisan war party insisted the president could send troops abroad without asking Congress. Now when President Trump wants to bring them home, Congress claims it has the authority to stop him. Whatever it takes to keep the war machine properly greased.

Until Trump, George McGovern was the only candidate of a major party to call for drawing down troops in Europe and Korea. The sentiment in McGovern’s 1972 acceptance speech is pure America First: “This is also the time to turn away from excessive preoccupation overseas to rebuilding our own nation.”

The establishment has hated McGovern ever since for the same reason they hate President Trump.

The money the war-machinists make in supplying our troops in foreign lands is ungodly. It’s in the multi-billions of dollars. Some of those dollars make their way back to K-Street lobbyists, and finally, to PACs and campaign funds.

The America First program would dismantle the imperial project that brought us NATO and has kept us on permanent war footing until today.

The foreign policy sachems built a “post-war rules-based international order” on the premise the United States can and must remake the world. They stationed our troops abroad and launched wars with no end. They merged the American economy with that of the rest of the world, destroying America’s industries, high wage scales and standard of living in the process. They constructed a permanent national security state with unchecked powers to pursue anyone including the president.

The precious “rules based international order” is empire by another name. To those who support it—Democrat, Republican, liberal, conservative, neoconservative, academics, lobbyists and pundits—it is the One True Faith.

Anyone who opposes it is anathema.

Even the elected President of the United States.

6:35 AM – Martin Jay, Inside Arabia @MartinRJay

CLICK HERE to listen to The John Fredericks Show – LIVE from Colonial Downs Raceway in New Kent, VA between 6-10 AM or go to johnfredericksradio.com and click LISTEN LIVE – Call into the show at 888-480-JOHN (5646). 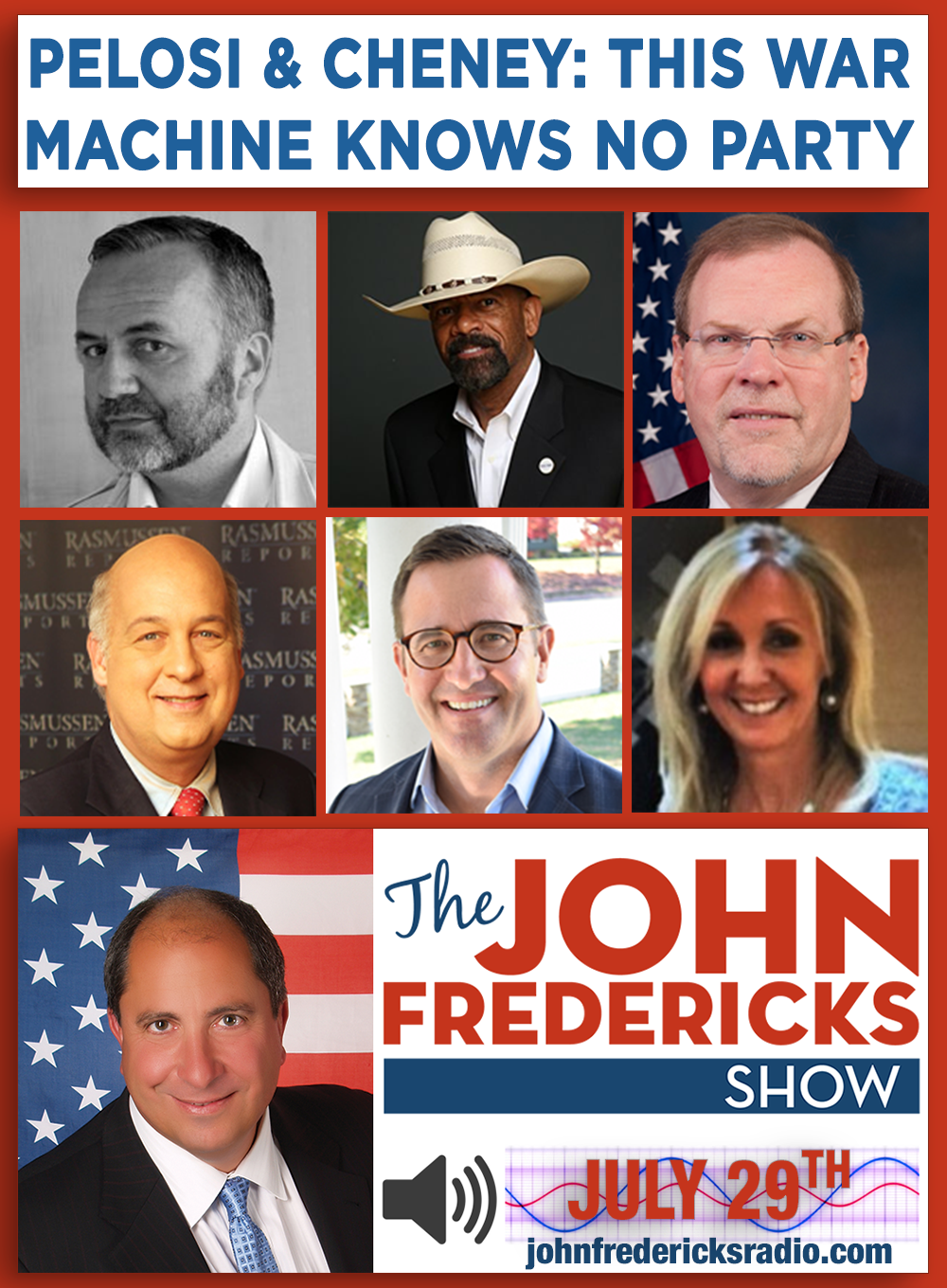