As President Donald J. Trump battles the coronavirus, all the while continuing to fight for the American people, the President’s re-election campaign has launched “Operation MAGA” to energize and mobilize the MAGA universe to maintain full speed until the President returns to the campaign trail. Vice President Mike Pence will kick off Operation MAGA with a virtual event tonight, along with Donald Trump Jr., Trump 2020 Senior Advisor Lara Trump, and Kimberly Guilfoyle, National Chair of Trump Victory Finance Committee, at 8:00 pm EDT. The kick-off event will be live-streamed here.

Operation MAGA is a full marshaling of top-level surrogates, campaign coalitions, and Trump supporters to rally behind the President and carry the campaign forward until the President returns to the trail. The campaign will pivot to in-person events following the vice-presidential debate on October 7.

Vice President Pence will begin a swing through key states following Wednesday’s debate in Salt Lake City, Utah. He will travel to Arizona, before voting early in Indiana and heading to other events yet to be announced.  Members of the First Family will host live events in battleground states beginning after Wednesday as well.  The campaign will also deploy its coalitions, including Women for Trump, Black Voices for Trump, Latinos for Trump, and others, for events in key states. 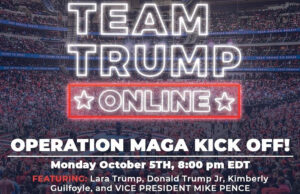