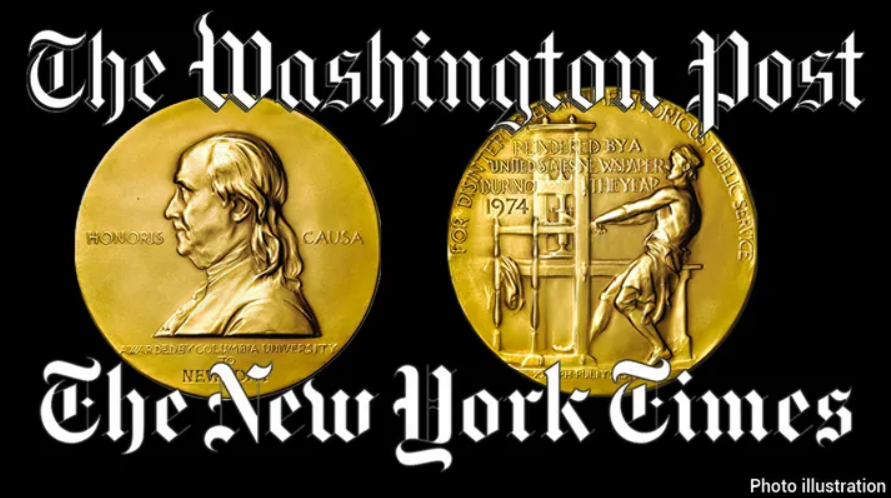 The Pulitzer Board has taken away any shred of credibility it had left with its “response” regarding the 2018 Pulitzer Prize for National Reporting, which was awarded to The New York Times and The Washington Post for blatant fake news. Instead of acting with integrity and providing transparency, the Pulitzer Board is running cover for the biggest reporting failure in modern history: the fake Russia Russia Russia collusion hoax.

Why would The Washington Post or The New York Times ever want to admit their obvious mistakes and come clean when their false reporting is being guarded, and awarded, by the Pulitzer Prize, which at one point actually meant something?

These outlets should hand back their prizes without notification from Pulitzer, which would be the honorable thing to do.

The only way The New York Times and The Washington Post should get a possible Pulitzer Prize would be in a new category—disinformation, for helping to perpetrate a false story created and peddled by Crooked Hillary Clinton, the DNC, and certain lowlife Democrats.

The truth is that the 2018 Pulitzer Prize was handed out for reporting that merely parroted political disinformation—disinformation that we know was fabricated by foreign operatives and my political opponents.

If the Pulitzer Prize has become a blatant acknowledgment of false, liberal political propaganda, then the Pulitzer Board should just say so.

Instead, they hide their supposed “independent investigations” in a veil of secrecy, so the public cannot know the truth.

I will continue doing everything possible to right the wrong caused by the 2018 Pulitzer Prize and also to right the wrong being done by the January 6 Committee of Unselects, where there is no Due Process, no Cross-Examination, no real Republican members, and no legitimacy. It is a witch-hunt of the highest level, the likes of which have never been seen in our Country before.