Something Stinks in Georgia

A formal complaint (obtained exclusively by Emerald Robinson) has just been filed with the Georgia State Election Board regarding “errors” in the vote-counting in Fulton County that impacted the stolen 2020 election. This 84-page complaint (which is too long a document and too large a PDF file to include here) explains in detail how Fulton County failed to provide an accurate vote tally for the 2020 election, and it has been filed by investigative journalist Kevin Moncla along with Joseph Rossi.

Let me repeat: the November results and the December recount results do not match.

The entire point of an election recount, of course, is to confirm the previous vote totals on election day — and this did not happen.

Fulton County was unable to do it. 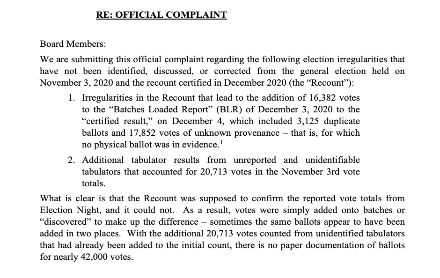 The original vote totals for Fulton County from November were: 528,777.

The December recount in Fulton County found the vote totals were: 511,543. 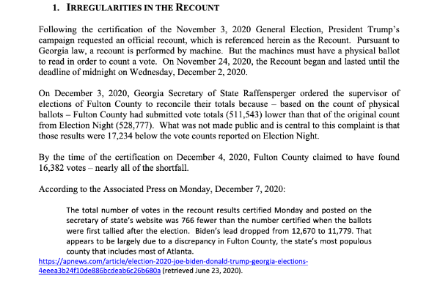 >Obviously, Fulton County was ordered by Georgia state officials to reconcile these vote totals — and Fulton County claimed that they “found” the missing 17,000 votes before the recount was certified on December 4th, 2020.

But the truth is that Fulton County does not have the paper documentation for those missing votes. The physical ballots are missing.

We know this because an open records request that was submitted to Fulton County provided an email from Fulton County Elections Director Rick Barron — dated December 3rd, 2020 —that shows the recount vote total as 511,543.

Where did Fulton County officials find the extra 16,382 votes in a few hours?

Fulton County also counted 10 tabulators with more than 20,000 votes on Election Day 2020 that do not exist. 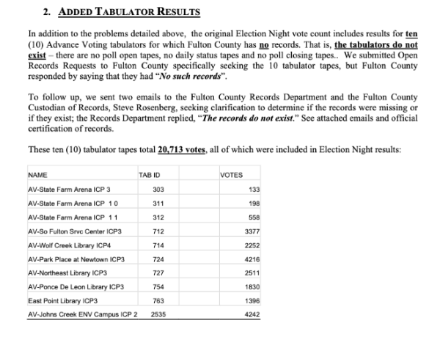 How important are those missing 17,000 votes in Fulton County?

How important are 10 phantom tabulators with 20,000 phantom votes in Fulton County on Election Day?