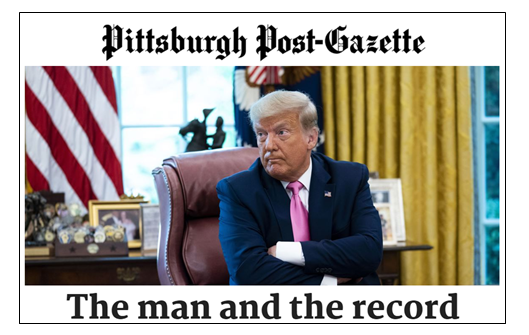 “He has put America first, just as he said he would.”

For the first time since 1972, the Pittsburgh Post-Gazette has endorsed a Republican candidate in a presidential election, backing President Donald J. Trump over Joe Biden in the important battleground state of Pennsylvania.  The newspaper endorsement relies heavily on President Trump’s economic record, including his strong support for energy industries like fracking, which employs 600,000 Pennsylvanians, and which Biden has repeatedly pledged to shut down if he is elected president.  The endorsement also lists a number of other reasons Pennsylvanians should support the President, including his achievements on jobs, the economy, trade policy, China policy, Supreme Court selections, keeping America open through the coronavirus crisis, and stamina for the job.

“Under Donald Trump the economy, pre-COVID, boomed, like no time since the 1950s. Look at your 401(k) over the past three years,” the endorsement read. “Unemployment for Black Americans is lower than it has ever been, under any president of either party. Under Mr. Trump, our trade relationships have vastly improved and our trade deals have been rewritten. Thanks to him, middle America is on the map again and the Appalachian and hourly worker has some hope.”

The endorsement continues: “No one ever asked the American people, or the people in ‘flyover,’ country, if they wanted to send their jobs abroad — until Mr. Trump. He has moved the debate, in both parties, from free trade, totally unfettered, to managed, or fair, trade. He has put America first, just as he said he would.”

On the important issue of fracking in Pennsylvania: “Finally, let’s talk about one of the most important concerns in this region — energy. Under Mr. Trump the United States achieved energy independence for the first time in the lifetimes of most of us. Where would Western Pennsylvania be without the Shell Petrochemical Complex (the ‘cracker plant’)?”

And the editorial endorsement did not mince words when expressing that Joe Biden and Kamala Harris are the wrong choices for Pennsylvania.

“But the Biden-Harris ticket offers us higher taxes and a nanny state that will bow to the bullies and the woke who would tear down history rather than learning from history and building up the country.

“It offers an end to fracking and other Cuckoo California dreams that will cost the economy and the people who most need work right now. ‘Good-paying green jobs’ are probably not jobs for Pittsburgh, or Cleveland, or Toledo, or Youngstown.

“It offers softness on China, which Mr. Trump understands is our enemy.

“Mr. Biden is too old for the job, and fragile. There is a very real chance he will not make it through the term. Mr. Trump is also too old but seemingly robust. But in Mike Pence, Mr. Trump has a vice president ready to take over, if need be. He is a safe pair of hands. Sen. Kamala Harris gives no evidence of being ready to be president.”