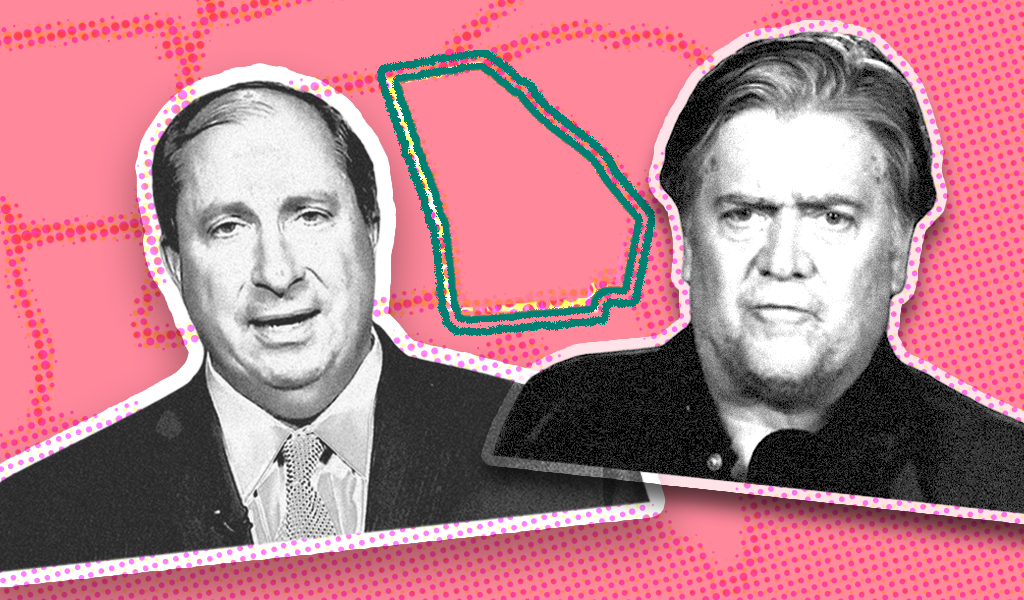 As Georgia puts the finishing touches on its hand recount and the state prepares for two crucial Senate runoff elections slated for early January, two talk radio hosts with close ties to Steve Bannon are launching a Breitbart-like hyperpartisan news site in the state.

Georgia Star News, which debuts Thursday, is the latest project of Star News Digital Media, a growing network of partisan websites that dress up right-wing media content and talking points to look like local news. The organization’s explicit aim is to deliver pro-Trump propaganda to residents of battleground states, coating local news in the same grievance- and conspiracy-filled vernacular as is used by outlets like The Daily Caller and Breitbart.

And that’s no surprise, since two of the figures behind the Star News sites — John Fredericks and Michael Patrick Leahy — are conservative talk radio hosts with deep ties to characters throughout the MAGA-verse, including Breitbart and its former executive chairperson, Steve Bannon.

“This is everything right now,” Bannon said on the November 14 edition of War Room: Pandemic, praising Fredericks’ enterprising ways in Georgia. “This is about action, action, action.”

Bannon’s connection to the Star network is disconcerting. Not only did he pioneer the use of hyperpartisan news as a tool of political warfare at Breitbart, but recently he’s leveraged his considerable platform to foment post-election chaos.

John Fredericks rose to regional right-wing stardom as an early adopter of the MAGA movement and as the host of the John Fredericks Show, a daily radio program that was based out of Central Virginia until recently. He also owns three conservative talk radio stations, and he has joined Leahy, who helped found the Star News Network, in expanding its operation to more battleground states.

Since its inception, the Star News network has been an adept misinformer. In recent months, the sites hawked the same bill of goods as national right-wing media outlets: stories that conflated racial justice marches and protests with violence and rioting, every hair-brained conspiracy theory about President-elect Joe Biden and his son Hunter, as well as up-to-the-minute reports on the latest mail carrier to not deliver between one and three mail-in ballots — ahem, “voter fraud.”

In the last few months, Fredericks and Bannon have formed quite a tandem. Bannon has appeared on Fredericks’ talk show more than a dozen times. Fredericks’ radio network was also the first to broadcast Bannon’s War Room podcast on the airwaves and has continued to amplify the former Trump adviser’s message even as his show has been removed from other platforms for using violent language. (Most recently, Twitter banned Bannon and YouTube and Facebook removed an episode of his show in which he called for the beheading of Dr. Anthony Fauci and FBI Director Christopher Wray.) Bannon’s show is embedded on the home page of each of the Star News pages.

In the past two weeks, Fredericks, who has temporarily moved his operation to Atlanta till after the Senate runoff elections in January, has served as Bannon’s go-to source for the news coming out of Georgia, appearing on nearly a dozen War Room episodes to spread misinformation about the Georgia elections. He has claimed that Democrats, led by former presidential candidate Andrew Yang, are encouraging each other to exploit a loophole that would allow them to briefly visit Georgia, register to vote, and vote in the upcoming elections.

Meanwhile, Fredericks has his own plans to invade Georgia ahead of the runoff elections. Fredericks has recently pitched Georgia Star News — which changed its name from the Georgia Star after Media Matters reported that the original name was already in use — as a competitor to the Atlanta Journal-Constitution. “We’re launching that so we can combat the fake-news, corporate AJC and the other crap here in Georgia you have to deal with, all of the corporate media,” Fredericks told his audience.

Fredericks has also repeatedly used his own radio program to float inflammatory conspiracy theories about the election and to lash out at Georgia Republicans whom he sees as insufficiently loyal to President Donald Trump — likely a preview of what readers can expect from Georgia Star News.

Fredericks has reserved special acrimony for Georgia’s Republican secretary of state, Brad Raffensperger — whom he calls a “weasel”  — criticizing him for not throwing out thousands of legally cast mail-in votes to help bridge the tens of thousands of votes Trump would need to flip the state. Bannon and Fredericks have also joined a growing chorus of right-wing figures who are criticizing and pressuring Georgia Gov. Brian Kemp to not certify the state’s election results.