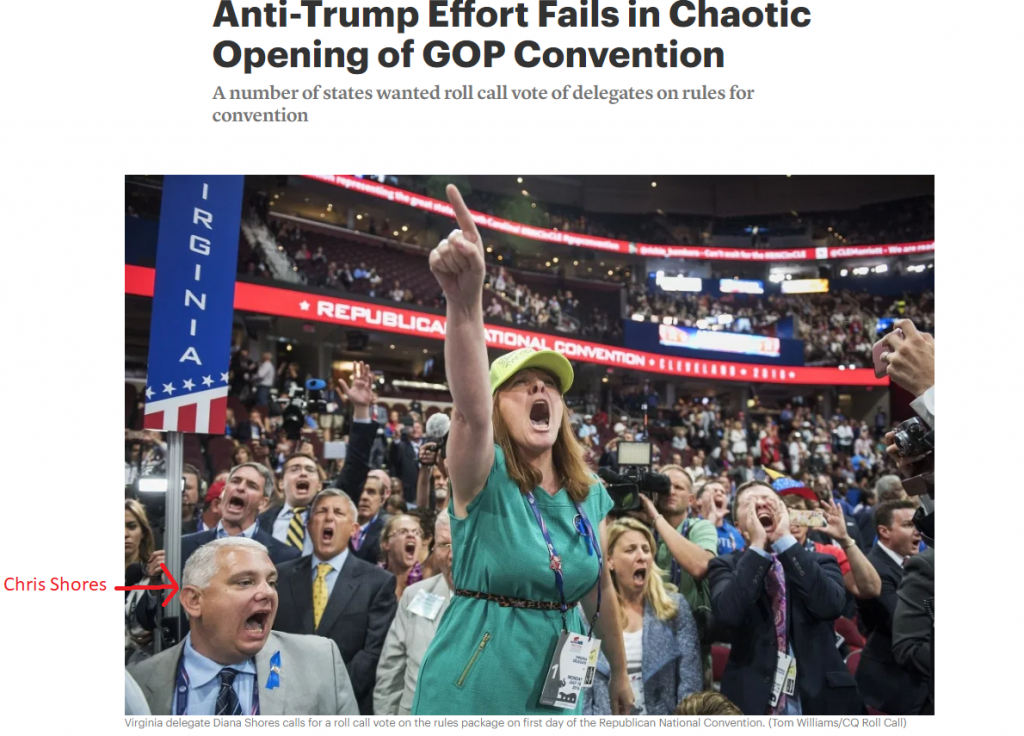 They tried to deny President Trump the Republican nomination at the 2016 RNC convention in Cleveland by employing a phony floor temper tantrum to “unbind” duly seated delegates.

Then they sided with the deep-staters who tried to oust Trump through a fake 25th Amendment removal clause through their disgraced surrogate Rod Rothenstein.

Now they want to get Trump super-supporter U.S. Rep. Denver Riggleman out of Congress and replace him with avowed Never-Trumper Bob Good with a rigged nominating convention in Virginia’s 5th Congressional District.

Chris Shores, a leading Never Trumper is the campaign manager of Bob Good, an anti-Trump Virginia Congressional Candidate.
In 2016, NeverTrumpers attempted to nominate someone other than Donald Trump at the 2016 Republican National Committee by changing the rules. Shores was a key leader in the failed Never Trump plot to over throw the will of the voters. Chris and his wife even got a great photo, pictured below in the Roll Call article title- Anti-Trump Effort Fails in Chaotic Opening of GOP Convention.
Fast forward to today, after being blacklisted by President Trump and his allies, Chris Shores is the campaign manager for anti-Trump Virginia congressional candidate Bob Good. So far Good’s campaign has paid Shores over $15,000 in 2020. Why would any Republican candidate pay someone who led a failed coup against Donald Trump? Probably because Bob Good also hates Donald Trump.
In a 2016 Facebook post, Bob Good called Trump his 17th choice out of 17 candidates for President- even ahead of pro-choice NY Governor Pataki and pro-gun control Chris Christie. Then, Good failed to praise Trump for two years until he announced for Congress. After announcing his candidacy for Congress, Good waited nearly two months before saying if he would vote against impeachment.
Clearly, Never Trumpers stick together, Chris Shores and Bob Good clearly share the same values: hating Donald Trump.