The Marxist who earned her fame providing guns to murder a judge in 1970 says she backs Joe Biden because the radical left will be able to push him around.

Here’s one communist who tells the truth, if only once.

Media presents the myth of the moderate Biden, but anyone with eyes can see what Davis confirms: The old vice president is too weak to stand up to the radicals who run in the streets and run his party.

Perhaps Joe will choose Angela Davis as his running mate. She is certainly qualified – she was the vice-presidential candidate of the Communist Party USA twice!

She also meets all the other criteria of today’s Democratic Party.

But no matter, even if she isn’t the veep, she and her radical cadres will be calling the shots.

In the short term, their goal is to make the country ungovernable. The riots, the desecration of statues, flags and other icons of American heritage, the social justice warrior mobs harassing anyone with a different opinion, the demands to close businesses and schools as long as possible – all designed to undermine functioning society and create a void for howling revolutionaries to fill.

And just like Angela, the radicals organizing the now daily protests in our largest cities are hardcore Marxists. How do we know? They say so.

Black Lives Matter co-founder Patrisse Cullors told an interviewer in 2015: “We actually do have an ideological frame. Myself and [BLM co-founder] Alicia [Garza] in particular, we’re trained organizers. We are trained Marxists. We are super versed on ideological theories.”

The Democratic Party in its hatred of President Trump is playing along with the radicals – and playing into their hands. Party leaders rush to accept the revolutionaries’ 10-point program no matter what is in it, from guaranteed jobs for all (except the police and border patrol), to racial quotas in hiring, housing and education, and even the elimination of industrial society.

To be fair, there’s more than Trump-hatred driving Democrats into the arms of the Red Guard.

There’s liberal guilt. These children of privilege believe their advantage came at the expense of the less fortunate – the Marxist version of Original Sin – so they flagellate themselves in order to expurgate their wickedness.

They embrace the notion that America is irredeemably racist, unsalvageable, not worth defending. Our own government peddles this radical poison, the Smithsonian denouncing hard work, planning for the future, and the scientific method as instruments of white supremacy. (New York City’s mad Mayor DeBlasio has his schools teaching this nonsense.)

Converts make the best evangelists, and Biden’s past with segregationists and mandatory prison sentencing make him a most impassioned convert, eager to prove the scales have fallen from his eyes. The only thing a politician likes more than an inside deal is an approval from a cheering crowd.
Smoke rising from the Biden basement signals his eagerness to “systemically transform” America.

There’s no faster way to transform the country than transforming tens of millions of illegal immigrants into voters, so first up on his agenda is immigration “reform.” Getting that done will be much easier if a Democrat-controlled Senate eliminates the filibuster, as Joe says he’s open to. Then, giving Washington, D.C., statehood assures Democrats will have two more senators to cement their long-term hold on the upper house; mail-in voting, another item on the to-do list, guarantees victory for them in local, state and federal elections everywhere. They will lock down the executive and judiciary by eliminating the Electoral College and packing the Supreme Court.

With all power firmly in the grip of one party, they will then “run train on the progressive agenda,” as Alexandria Ocasio-Cortez put it in a most disturbing and disgusting fashion.

All this will proceed in the first hundred days as the former senator from Delaware nods approvingly – or just nods off.

And as Angela Davis cheers.

Tune into The John Fredericks Show tomorrow from 6-10 AM. CLICK HERE to listen live or go to johnfredericksradio.com and click LISTEN LIVE – plus your calls all morning at 888-480-JOHN (5646).  Tweet @jfradioshow and hashtag #GodzillaOfTruth – complete show line-up here! 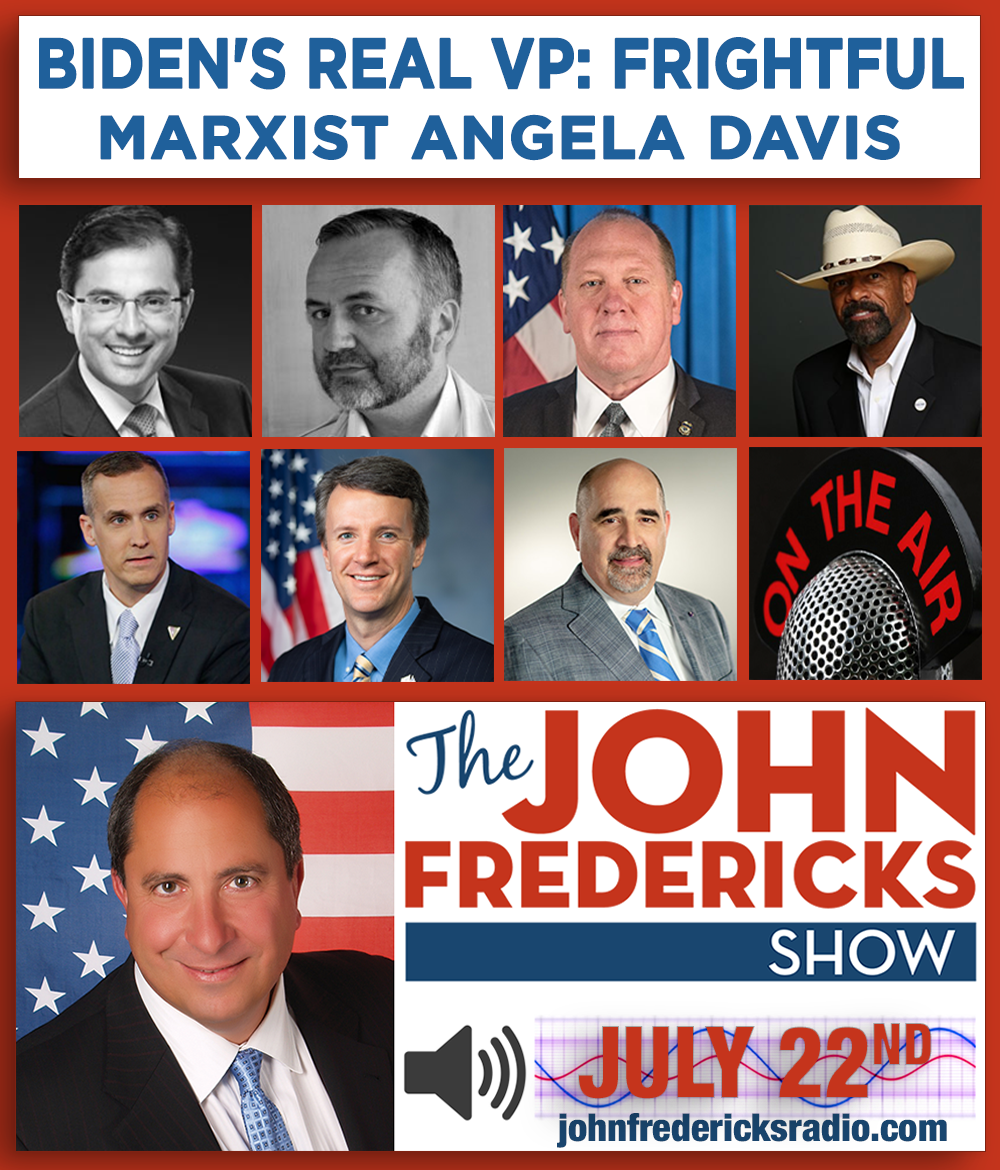