Hidin’ Biden Melts Down In Basement As 1.8 Million Jobs Added

“President Trump’s policies continue to bring the economy roaring back with another jobs report that defied economists’ expectations and brought good news to Americans recovering from the global pandemic. The last three months have seen a total of 9.3 million jobs created and they represent the single greatest three-month period of job-creation in American history.

Notably, 1.1 million of the jobs created last month went to women and the unemployment rate fell across the board, but also specifically for women, Blacks, Hispanics, Asian-Americans, and veterans. Everyone knows that Joe Biden was hunkered down in his basement hoping for a gloomy economic report to help him politically, which puts him in the pathetic position of being a candidate for President of the United States hoping for bad news for Americans.

This should remind voters that as vice president Joe Biden oversaw the worst economic recovery since the Great Depression and never saw a month of job creation that topped 540,000. Biden now pledges to raise taxes on Americans by $4 trillion dollars and impose the job-killing regulations of the Green New Deal on everything that makes our economy go. The fundamental choice for voters is between the fantastic record of President Trump, who built the world’s best economy once and is doing it again, and Joe Biden, whose economic record is terrible and whose plans for the future are ruinous.” 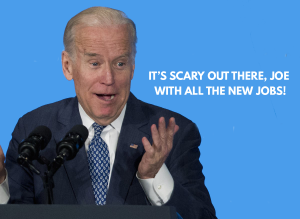