Trump Nation News August 6, 2020
By Mercedes Schlapp – Trump-Pence 2020
Most of the mainstream media say the same thing when it comes to voter fraud — it’s too rare to be consequential. In endlessly repeating this line, the media is now doing more than just slinging mud at President Trump. Dismissing any concerns about the integrity of America’s electoral process is a danger to our system of democracy.

CNN, it should come as no surprise, is parroting this narrative with even more certitude than its media counterparts. On Tuesday, I was a guest on Brianna Keilar’s CNN show. I discussed our campaign’s concerns with a new law in Nevada that would open up the potential for voting fraud on a scale rarely seen before in this country.

In 72 hours, Nevada Democrats rushed a fundamental change to the state’s election system in an eleventh-hour bid to change the rules to favor a Democrat victory in November. In the dead of night and less than 100 days from the election, Nevada Democrat Gov. Steve Sisolak signed into law a universal vote-by-mail system that would send a ballot to every address on Nevada’s voter rolls –requested or not — and whether the voter was still alive or not.

Furthermore, the law includes a provision that ballots received in the three days after the election would be counted, even if that ballot is not postmarked to prove the vote was cast before Nov. 3.

Imagine a scenario where Nevadan Democrats wake up on Nov. 4 to learn that President Trump won their state. Conceivably, they could collect ballots for Joe Biden and mail them the day after the election and, if they are received within the next three days, they would be counted.

Any reasonable person realizes how such a system exposes the election to massive voter fraud. CNN doesn’t see it that way. It’s important to call them out — especially when it concerns something as crucial and important as the integrity of our election system.

The day after my segment, Keilar doubled down on her ignorance of the new law and did a “fact check” on the Trump campaign’s legitimate and valid concerns. During Keilar’s fact-checking segment, she claimed that ballots will only be counted “as long as they are postmarked by dates of election.”

This is factually wrong. The Nevada law states that ballots will be mailed to addresses on the voter rolls along with a pre-paid return envelope. United States Postal Service regulations note that pre-paid envelopes are not required to be postmarked, meaning that if Nevadans mail their ballot back in the pre-paid envelope they received, that envelope may not feature the date the ballot was sent back. And, if that undated ballot is received up to three days after the election, it will still be counted. It is this provision of Nevada’s law that allows votes to be cast after Election Day has ended.

Keilar then claimed that “many states do this.” But Nevada is going to count ballots received up to three days after Election Day even if they are not dated. Again, this would allow people to cast votes after the election.

Keilar went on to claim that, in a universal vote-by-mail system, only “active voters” would be included. The term “active voter” just refers to individuals who are included on a states’ voter rolls, which are notoriously out-of-date and inaccurate. They are often not updated to reflect if someone has moved — including out of the state — or if someone has died.

For example, Los Angeles County voter rolls included 112% of the entire population — meaning, there were more people on the voter rolls than actually live in the county. Keilar also asserted that real-life examples of voter fraud aren’t anything to worry about.

I have dealt with, and socialized with, mainstream journalists in Washington, D.C., for my entire career. Sometimes we agree, often we don’t. But I respect the work the best of them do, and the critical role a free press plays in society. But this episode at CNN, and the host’s continued online harangue, was beyond the pale. I was further disturbed to learn that Brianna Keilar’s husband is a ferocious opponent of the president, a former director of the National Security Council under President Obama, and a man who tweets, among other things, that Donald Trump makes him “throw up.”

A modicum of journalistic integrity would require this disclosure by CNN on the selection of a nonpartisan interviewer, or at least one who commits to a fair and respectful exchange.
In truth, the collapse of a fair and spirited journalistic exchange may be as dangerous to democracy as the promotion of unfettered electoral fraud.

Tune into #JFRS with Guest Host Nick Freitas, Republican Candidate For Congress VA-07 @NickFreitasVA on Friday, August 7 from 6-10 AM with Special Guests: 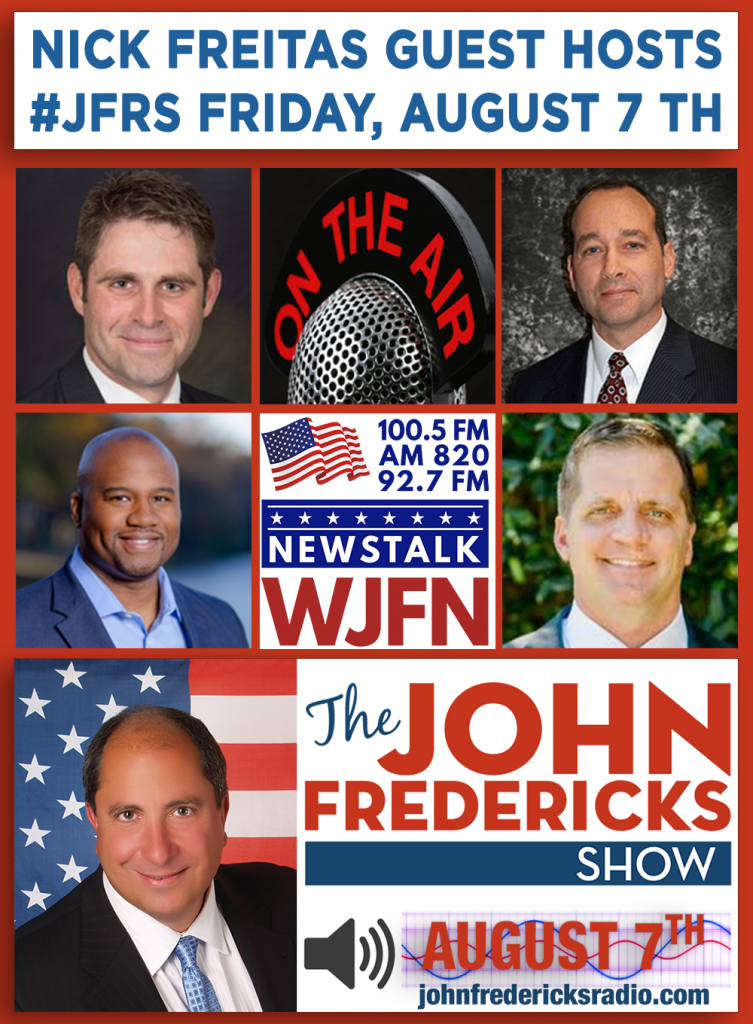 CLICK HERE to listen live to The John Fredericks Show between 6-10 AM or visit johnfredericksradio.com and click LISTEN LIVE – Call in to the show at 888-480-JOHN (5646).