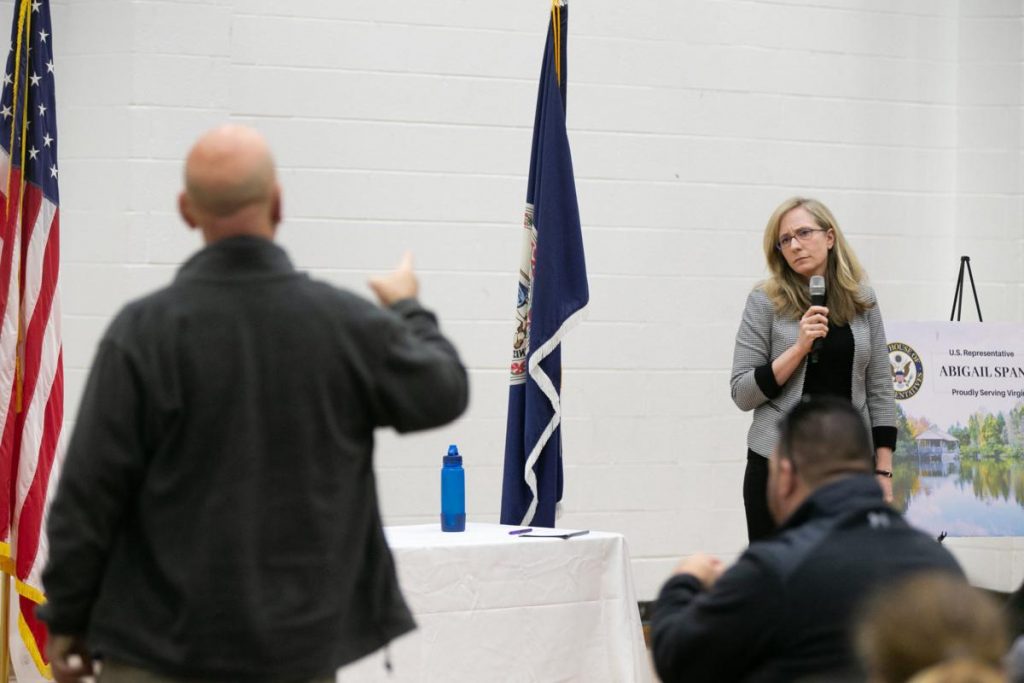 U.S. Rep. Abigail Spanberger (D-7), one of 31 vulnerable Democrats House members who won in Trump seats in 2018, got blasted by her constituents in a Town Hall meeting on Sunday. Some key quotes: “She doesn’t represent us. What has she done since she’s taken office to help this country, not a damn thing?”…On impeachment, “It’s bulls***”…“It’s lies, all lies. You know that.”… “Do you really honestly feel impeachment is going to be in the best interest of this country?”…Do you side more with [Speaker of the House] Nancy Pelosi or us?”…

Abigail Spanberger opened Sunday’s town hall in Spotsylvania County with updates on federal issues she’s been working on in Congress, such as lowering prescription prices and negotiating a trade agreement, but talk quickly turned instead to topics that have dominated local and national news in recent weeks.

Gun control, Second Amendment sanctuary status and possible impeachment proceedings against President Donald Trump monopolized the hourlong session at Chancellor Middle School. It was the 12th such town hall Spanberger, a Democrat, has held throughout the 7th District since she was elected a year ago.

About 85 people huddled in the seemingly unheated school gym, where those interested in asking questions were given tickets. Stubs were drawn from a bowl to determine who got to speak, and the third speaker, Michael Berry of Fredericksburg Virginia Patriots, asked Spanberger her stance on protecting the Second Amendment.

“What are you going to be doing to safeguard our constitutional, natural rights to bear arms?” Berry asked, pointing out that more than half the localities in her district have passed resolutions as Second Amendment sanctuaries that won’t enforce laws that infringe on their ability to own guns.

Spanberger cited her background. A former officer in both law enforcement and the CIA, Spanberger said she grew up in a house filled with guns among a family of sportsmen. “I fully support the Second Amendment,” she said. “It is a fundamental constitutional right, and I affirm that.”

Other questioners suggested her party affiliation trumped her background.

“Do you side more with [Speaker of the House] Nancy Pelosi and your party than with your constituency?” asked Keith Marshall, a dairy farmer from Orange County. “If more with the party, how do you justify that? Do you really honestly feel impeachment is going to be in the best interest of this country?”

Some in the crowd were already worked up by then, especially when Spanberger asked Berry how he used his assault rifle and if he hunted with it.

“What does that have to do with anything?” someone shouted.

“It’s none of your business what I do with it, it’s my right,” added another.

When impeachment was brought into the mix, the level of civility lowered. People shouted over speakers and called on random jeers. Those on front rows told those in the back to be quiet, that Spanberger was there to represent everyone in the crowd.

“She doesn’t represent us. What has she done since she’s taken office to help this country, not a damn thing?” said a man in the back, who continued to call out remarks until a Spotsylvania County deputy came to talk with him.

Spanberger told the crowd she’d shown a willingness to go against her party; she didn’t vote for Pelosi as speaker or for approval of the budget. She said her opinion of what’s happening “against the president is mine and mine alone, and no one has pressured me to vote a particular way.”

But as she outlined the impeachment process and the witnesses brought forward to speak about Trump’s conduct with Ukraine and if he compromised national security, audience members jeered again.

When she reiterated that “the allegations against the president are incredibly, incredibly serious,” several in the crowd, including Marshall, said the process was the Democrats’ effort to influence the 2020 election.

When the topic went back to gun laws, the congresswoman said she supported efforts, not to take guns away, but to keep them out of the hands of people with violent histories. She mentioned 15 states—Virginia is not among them—that have gun violence, or extreme risk, restraining orders, put in place by family members or law enforcement.

Paul Moog of Orange County said he didn’t want to hear “double-talk from the government,” as he mentioned bills proposed by another group of politicians, those in the Virginia General Assembly. One proposal, Virginia Senate Bill 16, would expand the definition of “assault firearm” and prohibit a person from purchasing, possessing or transporting one. A violation would be a felony, according to the proposal.

“We will not give up our guns, we have no duty to obey an unconstitutional law,” Moog said. “Hundreds of thousands of people are gonna turn into felons if you Democrats continue doing what you’re doing, and I’m not going to stand for it.”